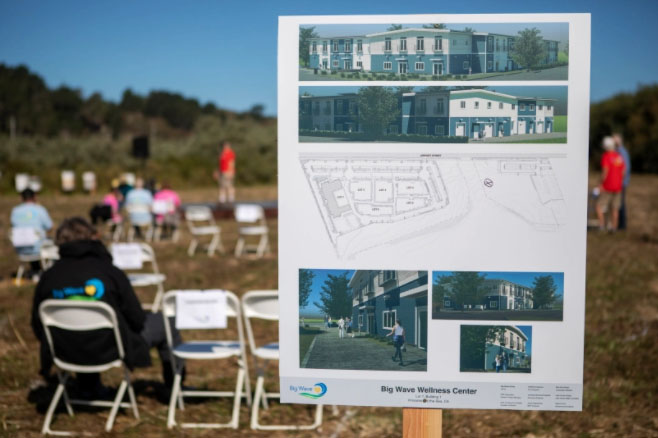 All of the families faced the same dilemma.

It was 1999 in Half Moon Bay, and the topic often came up among parents while sitting in the bleachers, watching their kids’ Special Olympics basketball games. Within a few years, many kids on the team would grow up to be adults with intellectual or developmental disabilities — but with few options in the Bay Area to live and work outside their parents’ homes.

“That is really the worst thing that claws at a parent’s mind,” recalled Jeff Peck, whose daughter was 11 at the time. “What is my child going to do after I die?”

More than 20 years later, those conversations have come to fruition — almost. As the Saturday morning heat rose, many of the same parents, kids and officials gathered on a parcel of land near the Half Moon Bay airport to celebrate the groundbreaking of a first-of-its-kind affordable housing community for people with disabilities in San Mateo County.

The finished project — built under Peck’s nonprofit Big Wave — will house 33 adults with disabilities, with the potential to expand. Commercial businesses, along with service provider One Step Beyond, will be built alongside the residential community to both subsidize the cost of the units and provide employment opportunities for residents.

Twenty-three of the spots are already accounted for, mostly to Half Moon Bay families who were part of the original discussions. All units are uniquely affordable — about $60,000 for a unit as compared to about $300,000 at many similar residential living facilities.

“We’ve never wanted this to be a community for rich families,” said Kim Gainza, an executive board member of Big Wave whose daughter will be a future resident. “This was the goal all along.”

The Gainza family searched for other options for years to no avail. Emmy Gainza, 29, has William’s syndrome, a genetic disorder that causes developmental delays. She had been living in her own condo with a roommate for the past two years, but recently moved back home because of the pandemic.

By moving into the Big Wave project, Emmy Gainza will be able to get back some much-needed independence, she said — while surrounded by friends from the Special Olympics community.

“It’s been twenty years that we’ve been fighting this whole thing, and I want the fighting to stop,” Emmy Gainza said. When she thinks about her life at Big Wave, she imagines “seeing my friends, being with them every day, doing new activities.”

Getting to this point didn’t come easy. Big Wave went through more than 30 public hearings and multiple environmental reviews before officials signed off, Peck said, and faced some opposition from a “small but vocal” group of residents who opposed the project.

Funding the $23 million project also proved complex. Peck and a business partner bought and donated the parcel of land for the project, but otherwise relied on funding from the original group of families, plus grants and donations from philanthropists around the Bay Area.

“It’s a remarkable accomplishment,” said Supervisor Dave Pine. “The journey they had was so hard — I wish it had been easier.”

Once the project is completed — ideally about 18 months from now, Peck said — he’d like to see it become a model for other supportive housing communities around California and the nation. But first he’d like to take a breather.

“I’m looking forward to getting out of that warrior mode and creating something that will last the rest of my daughter’s life,” Peck said.